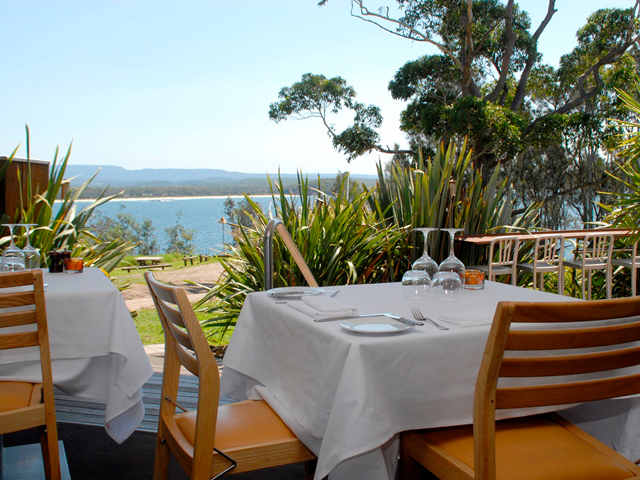 “Spectacularly sited on a headland with the pacific ocean all around, this hotel and restaurant is proof of Australia’s changing food culture and of a new swagger to the NSW south coast. Overseen by Rick Stein, Bannisters restaurant Mollymook is a memorable place to eat.

…Australia is about the best place to eat seafood. I began with oysters Charentaise, a mix of charcuterie and local rock oysters from the nearby Clyde River. None of that just-a-squeeze-of-lemon stuff here – this was bullish cooking in the confident Australian style, a bit of Europe, a bit of Asia and all of its own.

To that end, the Bannisters (NSW South Coast) menu offered steamed abalone with ginger and spring onions; lobster Thermidor; and flounder a la meuniere. A magnificent spicy, sticky Singapore chilli crab laden with garlic and coriander was brought to the table with a fine grilled fillet of snapper. All spectacular.” sainsburysmagazine.co.uk

Where are Australia’s great seafood restaurants? article in the Australian Newspaper, January 26, 2016

“John Susman, director of seafood industry agency Fishtales, at Coogee in Sydney writes “I’m sitting waterside, supping a dozen oysters of three varietals from six regions and sipping a glass of white wine as the warm summer sun smiles on the water’s surface. Life is pretty damn good. As fishing boats bob and sway over the glistening blue, things get even better when my main — a piece of fresh local fish simply grilled nude, but for a garnish of lemon and slap of molten butter — arrives.

Serving fresh, local and seasonal seafood by the water, surely this place qualifies as a great Australian seafood restaurant? The point is, I’m sitting at a table at one of Sydney’s highest-volume tourist destinations and coincidentally the location of my office, the Sydney Fish Market. So when the question is posed — “Where are Australia’s great seafood restaurants?” For a nation girt by sea, with such a wealth of premium seafood, it’s a reasonable question, and one that is often asked by visitors to our shores. According to Anthony Huckstep, co-author (with myself) of a forthcoming guidebook on Australian seafood, and national restaurant critic for delicious magazine, beyond the bounds of a handful of species, consumers don’t really know what to do with our treasures of the deep.

“The reason so many people don’t rate fish highly is because they’re used to eating it when it’s not at its freshest and whether it is cause or effect, many people simply won’t pay the price for the best, which is fresh seafood.”

Travellers’ table article: “Where to eat and drink on NSW’s South Coast”, December 15, 2015

“The summer playground for Australia’s southern capitals: Sydney, Canberra and Melbourne people come to the Mollymook Milton Ulladulla area for the fishing, beaches, boating and now, the food.

It’s no wonder that English celebrity chef Rick Stein made this town home to his antipodean restaurant, Rick Stein at Bannisters luxury hotel. The dining room overlooks the ocean and is set out with white linen on tables and fabric covered chairs. The tacit mantra here is best quality seafood served simply, with oysters from four South Coast locations to sashimi of marlin, swordfish, salmon and snapper. Stein’s chefs might tart it up a bit with a madras fish curry or nod to Old Blighty with a fish pie: morsels of snapper, salmon, trevalla, scallops and mushrooms in a creamy veloute with gratinated cheese and breadcrumb crust. Book ahead as it’s always busy.” Written by Richard Cornish. Read there full article 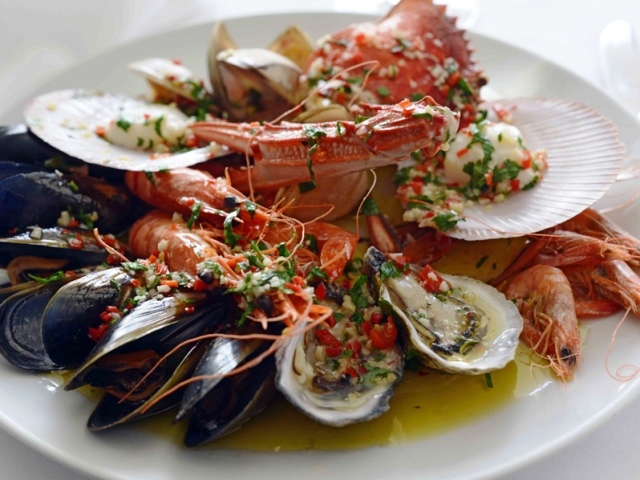 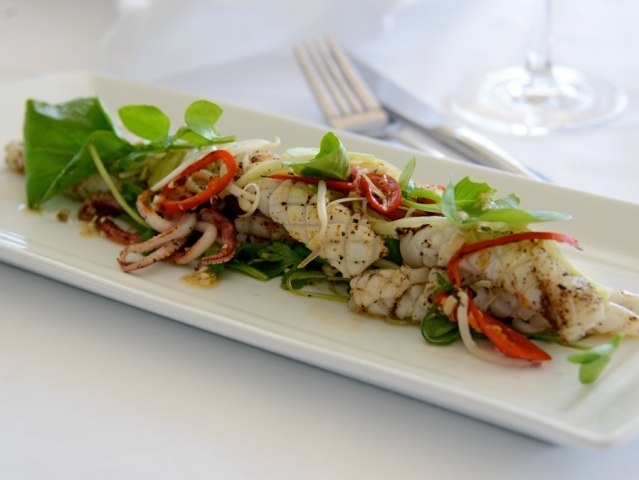 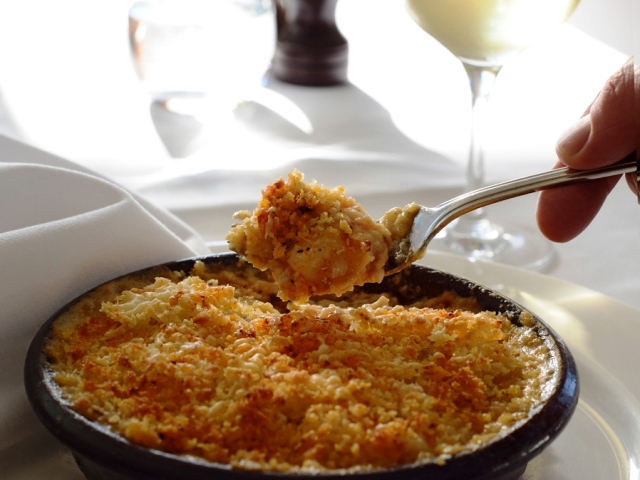 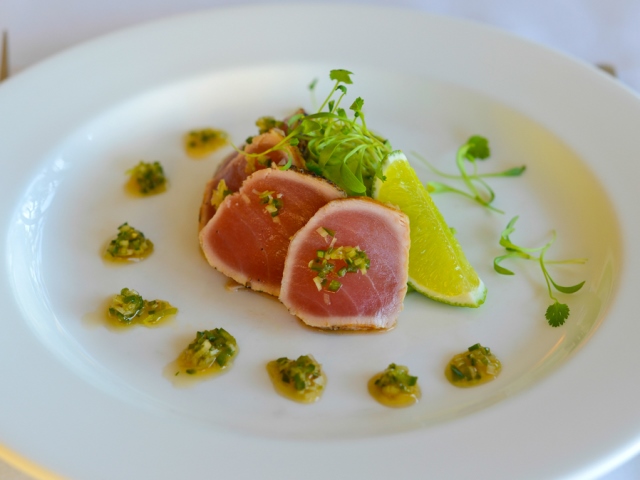 Quote: “There are two things about dining at Rick Stein’s celebrated restaurant overlooking the ocean at Mollymook that don’t come as a surprise.

Firstly, the menu is almost entirely seafood. Tonight there is only one dish on the menu (not including dessert or side dishes) which doesn’t include fish or seafood: braised lamb shank with potato fondant, eschallots and peas.

The other non-surprise? Rick Stein himself – now the world’s most famous fish chef because of his many books and TV series – isn’t in the kitchen. He’s not even in the country. He rarely is, though he has a home here in Mollymook, the gorgeously unpretentious seaside town that is barely four kilometres out of Ulladulla on the NSW South Coast. The affable Stein and his Australian wife, Sarah, opened Rick Stein at Bannisters in 2009. But he’s usually found in Padstow – the historic Cornish fishing village where his empire began (now lampooned as Padstein because of the four restaurants he has in town). Or he is combing the world, film crew in tow, for increasingly more exotic ways to serve fish.

Instead, our chef tonight is Welshman Toby Bradley-Watson who has worked for Stein for four years between stints as a private chef on super yachts.

We’re here, in winter, for a 7pm dinner. Wrong move, Bradley-Watson points out. It’s already dark. If you’re going to have one meal at this cliffside hotel/restaurant, make it lunch – or at least a summertime dinner when you have enough daylight to enjoy an aperitif on the terrace above the ocean that has provided most of the food you’re about to eat.

Dinner at Rick Stein at Bannisters. One of the nicest touches here is the inviting ante-room where you can relax with a pre-dinner drink in front of the log fire.

When we’re shown to our table, I ordered one each of the three rock oysters on the menu (Narooma, Ralston Brothers Waterfall and Tuross: there’s also a Ralston Brothers Pacific Oyster). I’m also tempted to order the Oysters Charentaise as an entree (“A seemingly odd combination – freshly opened oysters with some hot, spicy sausages. The idea is that you eat an oyster, take a bite of the sausage, then a good gulp of cold white wine”).

But a special entree is being offered this evening: Pipis with chilli, lemon and oregano sauce. Bradley-Watson explains that it is variation of a dish from Stein’s latest cookbook, ‘From Venice to Istanbul’. One of the restaurant suppliers had mentioned he’d got some particularly good pipis, and so the chef had adapted a Greek dish from the new book.

For a main, it’s hard to go past one of Stein’s most famous dishes: Madras fish curry of snapper, tomato and tamarind. (“Don’t believe it when people say spice ruins the taste of good fish,” Stein writes on the menu. “It accentuates it.”).
All of this is washed down with an Australian verdelho recommended by our waiter”.  Written by Steve Meacham, Food Australia.

Quote: “Rick Stein has a love affair with Australia, which has spanned a long time since his first visit at the age of 19. The lure of this The Shoalhaven area where Mollymook is located is part of the unspoiled south coast of NSW. Here Rick Stein, and we, find pristine beaches, great weather and the freshest seafood, which is one of his signatures. This is what drew him away from his loved Padstow in the UK, if only for limited times throughout the year. Rick Stein was not present when we were there. It could have been his commitments to his other restaurants, bistro’s and a fish and chip shop, or it could have been a restraining order. Not sure which.

Regardless, Rick Stein at Bannisters is his restaurant, his menu and his personally trained chefs who stand for everything that Rick Stein has built up over his impressive career. The Shoalhaven area of NSW, Australia has gained great recognition for its culinary delights. The region has a plethora of excellent produce. Being located along the sea, the seafood is second to none. The amount of restaurants, wineries and cafes with innovative and outstanding cuisine will inspire you to visit this unspoiled region of Australia.

We started our gastronomic venture with – seafood. As if we were not going to. I commenced with the Stir Fried Eden Mussels with Black Beans, Garlic, Ginger, Coriander and Spring Onion. The mussels were plump and the sauce was the lightest and most flavoursome sauce that I have tried. Gordon had the Oysters Charentaise. Described as “A seemingly odd combination – freshly opened oysters with some hot, spicy sausages. The idea is that you eat an oyster, take a bite of the sausage, then a good gulp of cold white wine.” I went on to a main of Indonesian Seafood Curry with Ling, Squid and King Prawns, served with green bean and fresh coconut salad and steamed rice. Gordon had Madras Fish Curry of Blue Eye Trevalla, Tomato and Tamarind. “A beautiful hot and sour Southern Indian curry which brings out the very best of one of my favourite fish. Don’t believe it when people say spice ruins the taste of good fish, it accentuates it.” It did, it was a beautiful meal. All we can both say is that the seafood from the Shoalhaven area is delicious and the chefs certainly know what they are doing. The portions were very generous, meaning I could not quite get through my main. That also could have something to do with the fact that we ate at Tallwood for breakfast, and then had a very large lunch at Cupitts Winery and Restaurant.

The Shoalhaven is a gourmand’s paradise, and that is what lured Rick Stein here. Because I can’t help myself, I did order dessert. I chose a mix of ice cream and sorbets, and here again you can see the influence of Rick Steins travels. There was an orange and cardoman as well as a coconut inspired sorbet. The other was chocolate, because ..well ..it was chocolate.
Gordon selected Kaffir Lime Leaf Panna Cotta with fresh mango, toasted coconut and mango sorbet. We had a beautiful meal. We did appreciate the freshness of the ingredients and the styling of the flavours. We are onto such a find in the Shoalhaven region of southern NSW, Australia”.

A Table for Two: We thoroughly enjoyed the meal at Bannisters, this is what good food is all about, perfectly cooked seafood with a perfectly balanced sauce.  Foodie Billy Law’s full article on his experience at the Rick Stein Bannisters restaurant.

Best Restaurants: “Since opening in October 09, Rick Stein at Bannisters Mollymook has created a name for its inspired seafood excellence. The coastal destination with Ulladulla Harbour nearby means that the seafood is ‘fresh-off-the-boat’ and of the highest quality. Your meal here will certainly be a memorable dining experience and a delight for the culinary senses”. Full article. 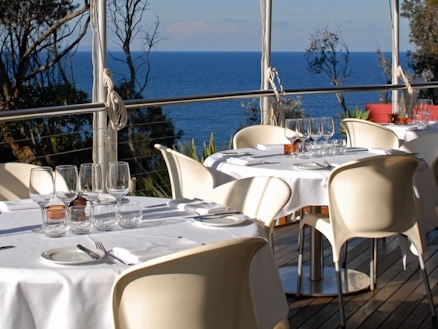 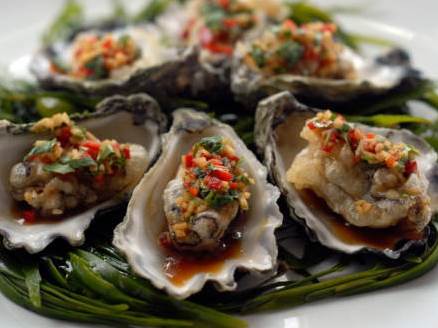 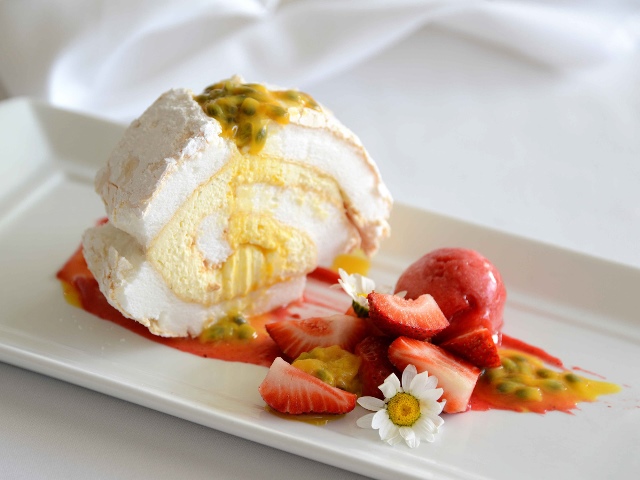 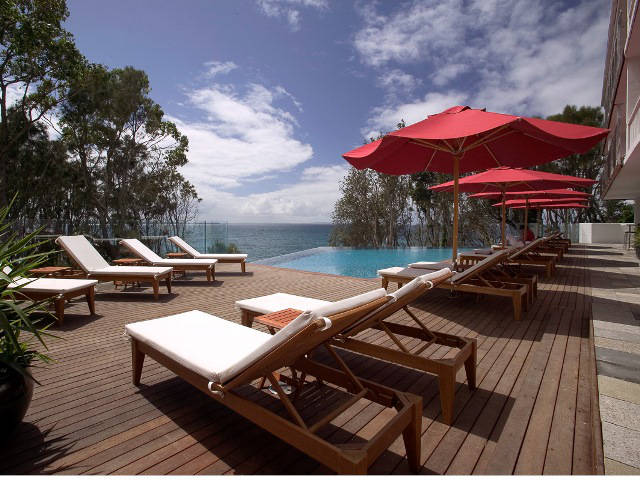