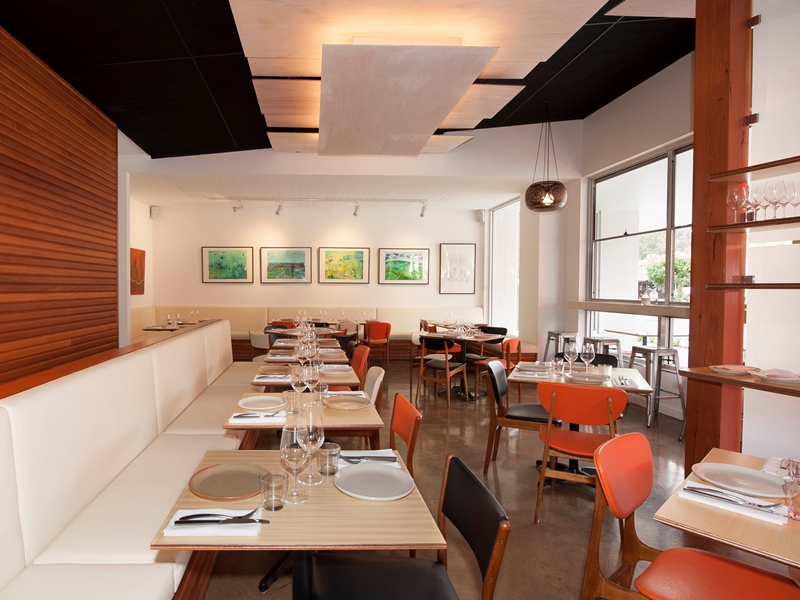 Tallwood Restaurant is a slick, contemporary all-day eatery. Lunch and dinner are of the shared-plate genre, and run the gamut from taro chips with chipotle aioli through to red-braised pork belly with kimchi salad .. with lots of spices and Asian influences”. Full article.

Victorian food critic Nicholas P. wrote: “To sample the food creations that Executive chef Matthew Upson (Tallwood Restaurant) brings to the table is a menu that is sophisticated yet simple, honouring the flavours of each and every ingredient.” Mollymook News

Quote: “The popular towns of Milton and Mollymook are quickly becoming a culinary destination. Lying within 10 minutes of each other, visitors can complement a day at the beach with excellent food and wine.

Quote: “Tallwood according to some locals I know, is the best restaurant in the area. But its location is easily the least impressive tucked away in Mollymook’s least main street.

Breakfast had been good. But why on earth did I opt for the Big Breaky option (potato rosti, bacon, tomato, house beans, mushrooms, chorizo, poached eggs and sour dough bread at $24) when I could have had the much more slimming house-cured salmon (plus avocado, fennel, and lemon myrtle for a mere $18)?

Now we have returned to Tallwood for Saturday dinner.

So far, Matt Upson, Tallwood’s head chef, has kept a low profile, even though he has a very impressive culinary profile, having trained in South Australia under Cheong Liew, Simon Bryant and Maggie Beer among others. In 2010, he and his partner moved to the south coast, opening Tallwood in 2003 with front-of-house business partner Clayton Till.

Till explains that both he and Upson have travelled extensively through Asia and have embraced the share plate philosophy.

Till designed the restaurant, which has a casual, beach shack feel, with the kitchen deliberately open to provide theatre.

The menu changes constantly in tune to the seasons and the availability of local produce. But some favourites are consistent: Portuguese fishcakes, local seafood paella and twice-cooked pork belly”. Written by Steve Meacham – Food Australia

Quote: “If you are like us and enjoy cutting edge dining – consider a South Coast meets Barcelona experience here in Mollymook, one of the best kept secrets south of Sydney – Tallwood Restaurant. A finely planned degustation meal, matched with local and imported wines helped set off the flavours and tongue textures of the small but satisfying dishes from starters through to an ice- cream semi-fredo to die for. Modern decor with a sharp vibe helped round out this experience. Of course you can make your own combinations using the Tapas style of this restaurant. Do yourself a favour and don’t miss out”. Written by Rick Westcott.

Contented Traveller 2015, Gordon and Paula write about their experience at the Tallwood Restaurant:

Quote: “It is testament to a café when you literally don’t want to leave, and we didn’t want to leave Tallwood Café in Mollymook. Located just over 3 hours from Sydney and 2½ hours from Canberra, the Shoalhaven area of NSW has earned a reputation as a foodies paradise.

The owners of Tallwood, Clayton Till and Matt Upson have travelled extensively throughout Europe and Asia and firmly believe, as we do, that dining is an experience best shared. This is definitely our idea of eating also. Food and travel are integral to one another, and become the core to meeting other people and to understanding more about the cultural similarities and differences.

Tallwood epitomizes this with its approach to free-form dining and the shared food concept. This is where people are brought together by a shared passion for food, and very good food at that. There is a laid back feel in this very on trend café, where the décor is modern and welcoming.

Tallwood is contemporary in its food, and the menu is impressive. It was easier to ask co-owner Clayton for his recommendations, and we followed this. The free-form dining concept must work because it wasn’t long before we were chatting with a local lady. She works in educating people on fresh food and had a lot of very good things to say about Tallwood. Then we were able to distract the owner, Clayton from his coffee machine to shoot the breeze. It is always reassuring to see the chef in the kitchen and to see the regional produce that he is using. Smelling the aromas wafting from the kitchen was exciting.

The Shoalhaven is a gastronomes paradise. It attracts many avant-garde and contemporary foodies”. Read full article: Contented Traveller.com

‘…we were treated all night with an assortment of fine food that was nothing short of amazing. Tastes that I will never forget. Portuguese fish cakes with saffron mayonnaise, duck rillette with piccalilli and house bread; roasted duck breast with leg confit, braised lentils and baby carrots; local Eden black-lipped oysters and the list went on.

Matt has an impressive resume behind him including stints at Southern Ocean Lodge on Kangaroo Island and Capella at Lord Howe Island….. In the burgeoning food scene in and around Mollymook, Tallwood is a standout. Do yourself a favour and get down there yourself. Tell Matt and Clayton Tim sent you. Foodie editor’s, Michelle & Tim. Read full article

‘The essence of the Tallwood Restaurant is about creating lasting memories with friends and family over a delicious meal, and delicious it is! Executive Chef Matt Upson has spent 20 years cooking, starting out in South Australia and training under some of the best chefs namely Maggie Beer, Steven Snow, David Reyner to name a few. Matt made his mark at some of Australia’s most highly regarded restaurants namely Southern Ocean Lodge on Kangaroo Island and Capella Lodge on Lord Howe Island. It was so nice to sit and chat with Matt and Clayton, tasting the beautiful Asian infused share plates and to die for desserts that just kept on rolling in!”  Full article ‘Eat Read & Love’

The Tallwood restaurant has a modern “big city” feel to it, yet it is located in a little town called Mollymook on the South Coast of NSW. The menu is the same for lunch and dinner, so I decided to have both meals here so I could try more of the dishes. For lunch we decided to have lighter options to save room for our evening meal! The food did not disappoint. I was partial to the “salumi Australia” cured meat board and the Black Angus scotch (which I ate without the pine mushrooms due to FODMAP’s), while my mum loved the Portuguese Fish Cakes served with a saffron mayo. For dinner my favourites were the Japanese pancakes, American spare ribs with tomato, coriander and lime, and the red braised quail. We thoroughly enjoyed both meals. If you are in the vicinity of Mollymook, you really need to check this restaurant out”. Full article.

Tallwood Restaurant never disappoints and contributes greatly to the ongoing food experiences available here in Mollymook. They are the best of the best, service is friendly, well executed and the waitresses are knowledgeable about the food being served. Food is delightful, always tasty and interesting and yes they even were able to match a desert with a beer, truly artistic. Mollymook News. 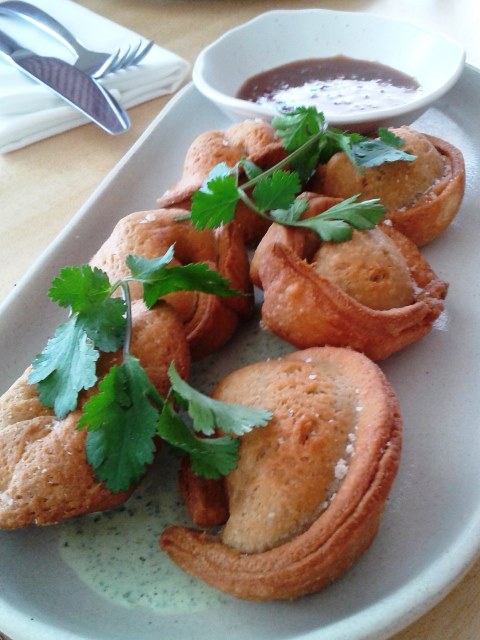 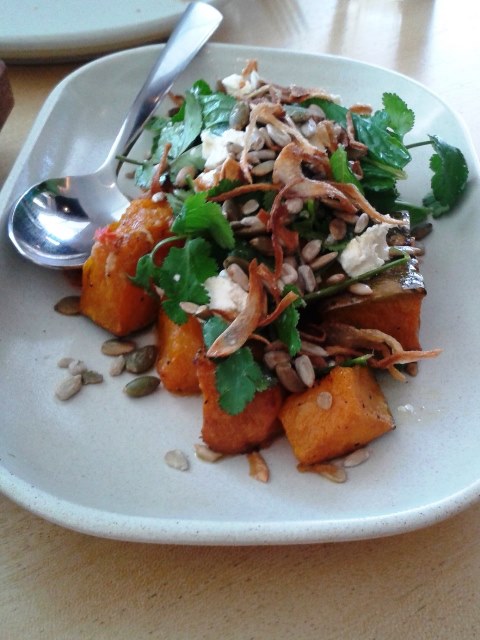 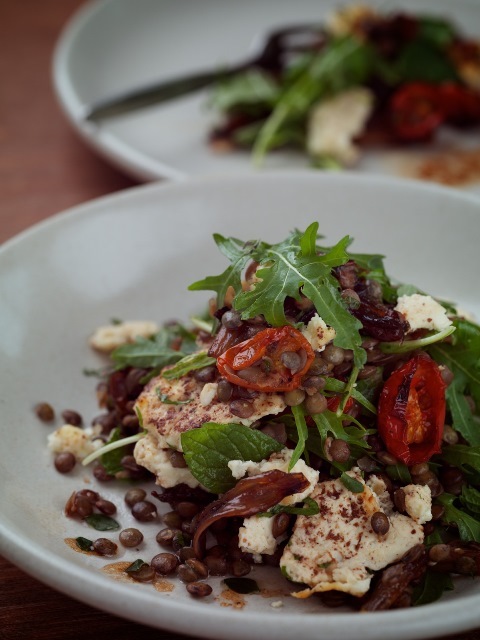 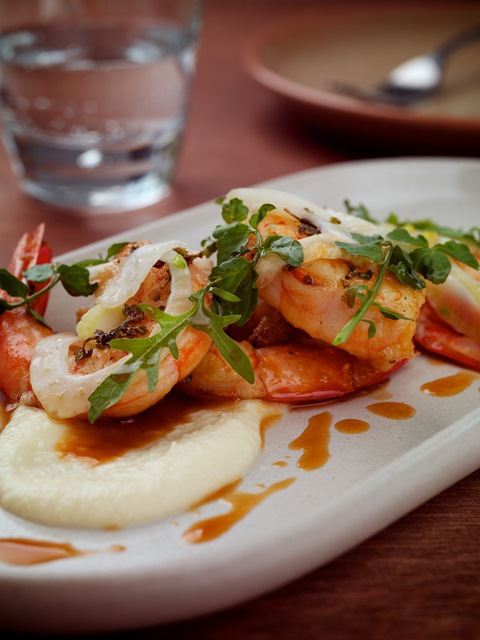 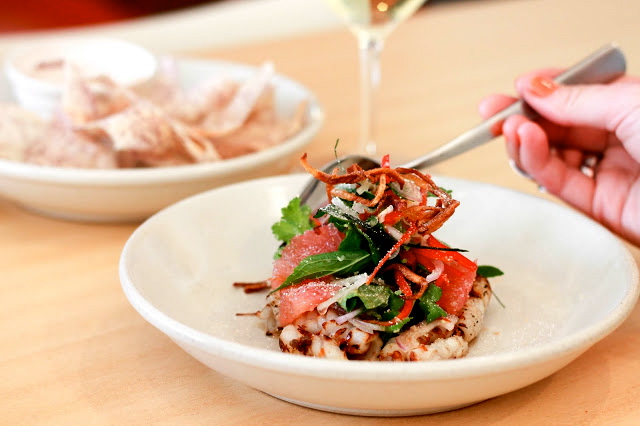 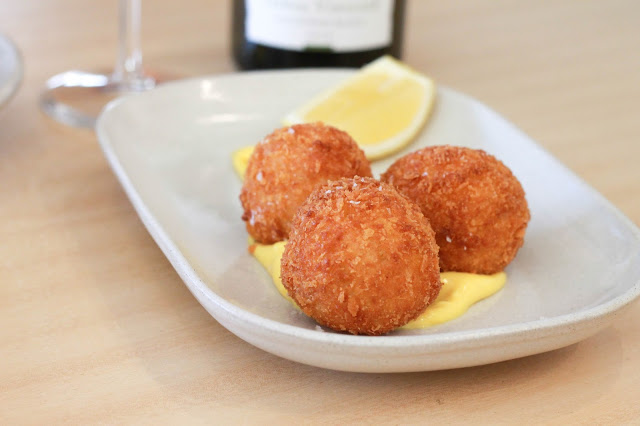 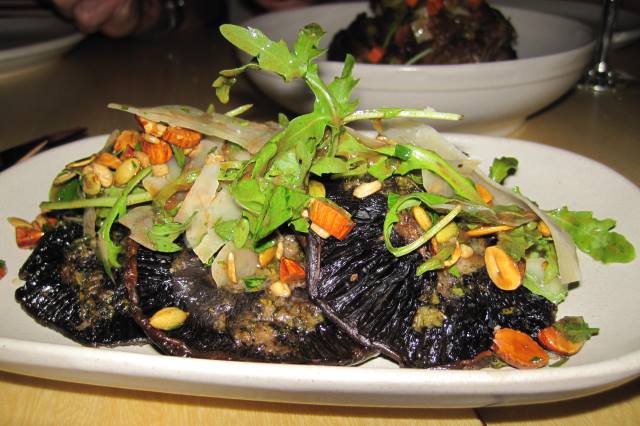 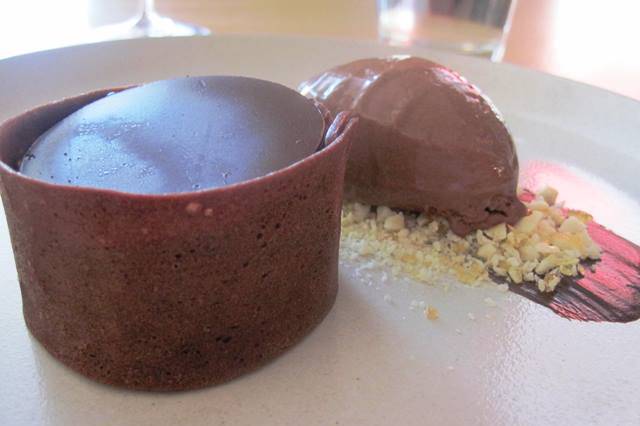 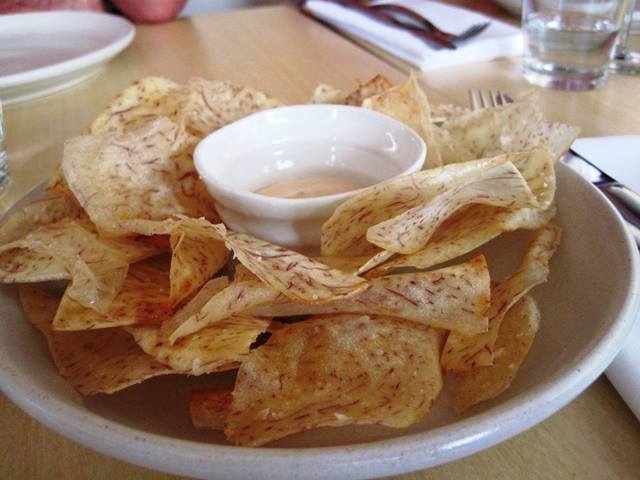 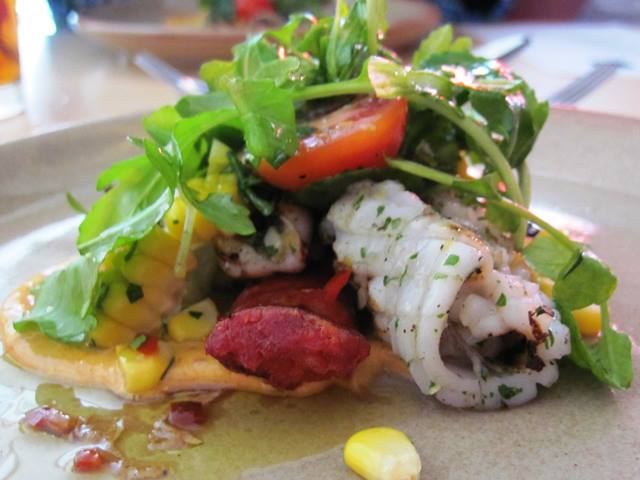 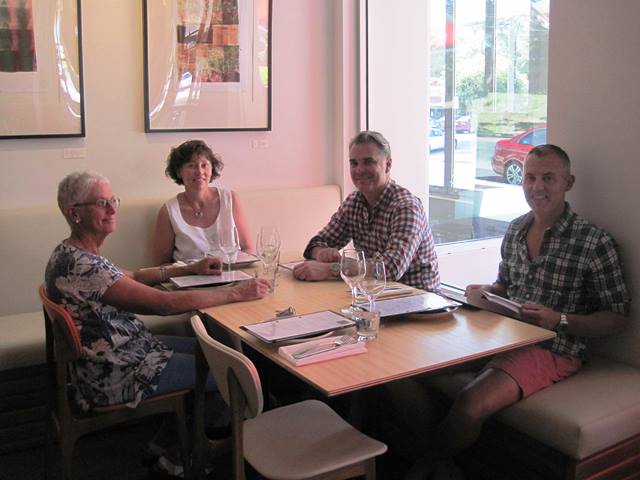 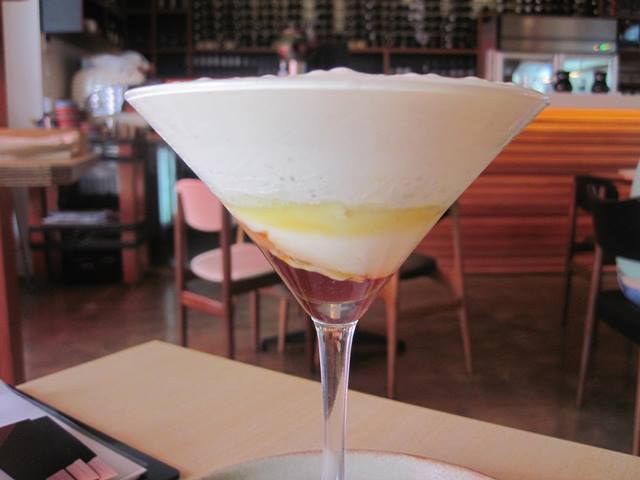 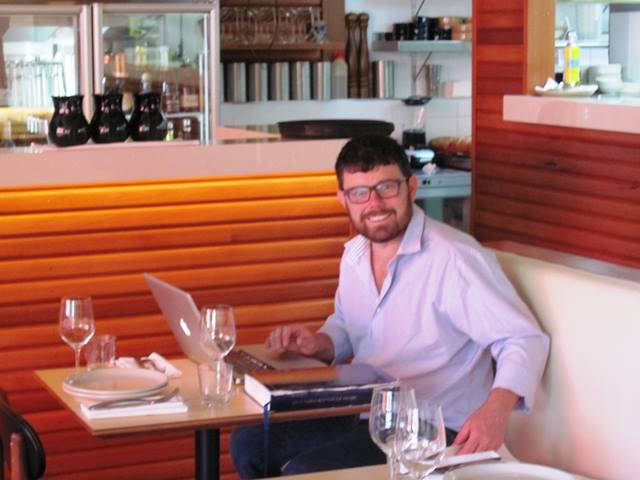 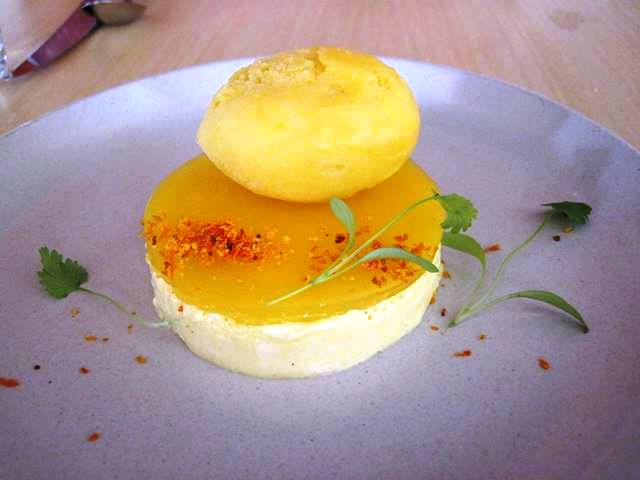 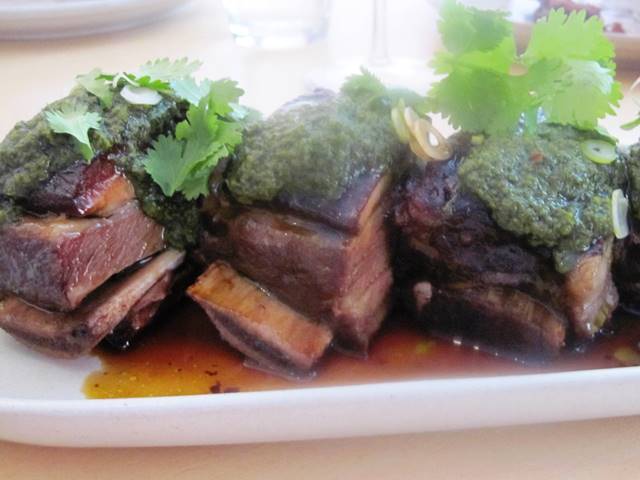 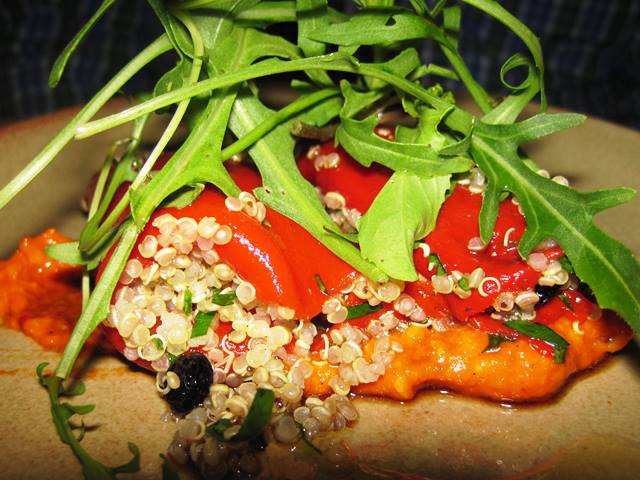